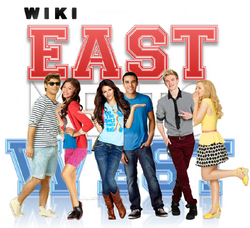 East Meets West is an upcoming Wiki Channel Original Movie musical that premiered on September 26, 2014. The movie went into pre-production in July 2013. Very little is currently known about this film. It will be a major musical and will follow the story of two rival high schools. Creator of the film, Jessie1010 says, "I can't say too much but this movie is going to be a major musical with a lot of singing, a lot of dancing, just a lot of things. It's seriously going to be something Wiki Channel's never seen before and it may even feature some big Wiki Channel stars." It was announced on January 24, 2014 that casting was underway for the film and it will begin filming in late winter in Albuquerque, New Mexico for a 2014 premiere on Wiki Channel. [1] The cast was officially announced on May 24, 2014. Filming officially ended in early June 2014 (not counting re-shoots). Teasers for the movie began airing on Wiki Channel in late July 2014.[2] The movie premiered on Wiki Channel September 26 at 8/9c.

“East Meets West” follows the story of Eastwood High and Westwod High, two rivaling high schools that have never gotten along. Rachel Gold is the new girl at Eastwood High. Once a choir singing sensation, she has transformed herself into a phenomenal journalist and her scholarship for writing is what brings her to Eastwood. Ricky Francis is Westwood

High’s star football player who has just recovered from an injury caused by a football game against Eastwood High, its rival school. Now in a new environment, Rachel wants to try new things and to embrace her new school spirit centered school, she joins the cheerleading leading team. For her first duty as a newbie cheerleader she must steal a Westwood High trophy. But when Westwood High’s theatre department is in need of a replacement for their school musical and Rachel gets caught stealing the trophy, she is cast against her will along with Ricky to star as the leading couple. The problem is Rachel can’t be in a Westwood musical when she’s from Eastwood. However, Rachel happens to actually like the role so she decides to pose as a homeschooled student whenever she goes to Westwood High for rehearsal. And all the while, she begins to develop feelings for her co-star, Ricky. But soon, when her lie is exposed to the cheerleading team and Ricky, word spreads that Rachel betrayed Eastwood and Rachel finds herself to be the most hated girl in school. Even Ricky feels betrayed as he never would associate with someone from Eastwood after the incident. Soon Rachel decides enough is enough and determines herself to end the feud between Eastwood and Westwood once and for all, not only so people will realize that Eastwood students can be friends with Westwood students but also so she can win the guy she’s come to care about most back. 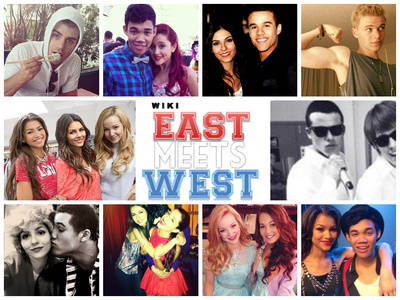 
Rachel is the new girl at Eastwood High who is a fantastic journalist. She has 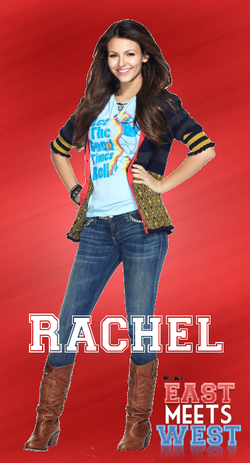 a very witty, confident, and dazzling personality and considers journalism her passion but also has a talent in singing. Rachel was once a phenomenal choral singer but after deciding she didn't want to do something so shallow, she turned her attention to writing and since then has transformed herself into an award winning journalist. When she arrives at her new school, Rachel is overwhelmed by the amount of school spirit that everyone has, so overwhelmed that she decides to do something new and audition for the cheerleading squad. Rachel gets in and as her first duty as cheerleader, she is told to go steal one of Westwood High’s trophies. Rachel accepts the challenge but she ends up being caught by Ricky Francis, Westwood High’s popular jock, while attempting to steal it. Soon after, they both are caught by Westwood’s drama teacher, Ms. Bailey, who assumes they both were stealing the trophy. Ms. Bailey recognizes Rachel from her viral video and forces her to star in the school’s spring musical, alongside Ricky, or she will report them both to the principal. Rachel and Ricky have no choice but to accept.

And Rachel even seems to enjoy it a bit, however, she must keep it a secret from her Eastwood friends. Ricky and Rachel seem to click instantly and overtime develop strong feelings for each other. But soon, when Ricky and the cheerleaders find out Rachel’s little tale, she becomes one of the most hated girls in school for “betraying Eastwood” and Ricky refuses to talk to her since she goes to Eastwood. Once she is kicked off the cheerleading team, Rachel finally decides that enough is enough and using her awesome journalism skills, she finds a way to bring the two schools together once and for all so she can loose her reputation as “most hated girl in school” and so she can win back the heart of Ricky.

Ricky Francis is Westwood’s star football player. Last season, during the championship game against Eastwood High, Ricky was pushed down on the ground by an Eastwood player, causing a serious leg injury. Ricky could not play football all summer, missing a once in a lifetime chance to go to a major football camp. Ever since then, he has resented Eastwood. Now he’s back and ready to play for the Westwood Warriors. But when Ms. Bailey catches him singing in the halls, she asks him to audition for the school play, which he declines. But when he is seen with Rachel “stealing” a Westwood trophy, Ms. Bailey blackmails the two of them into starring in the school’s play. Ricky does and as time goes on, he grows to have feelings for Rachel. He happily goes to every rehearsal just to see her, even if it means skipping football practice. But, when he soon finds out she is an Eastwood student, he’s reminded of that awful day and wants nothing to do with Rachel. And after that, he prepares even harder for the game. But will Rachel be able to win him back when she reveals the truth behind Eastwood and Westwood’s shocking past? 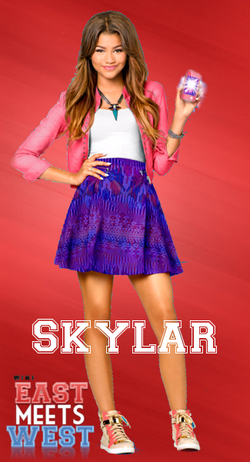 Skylar Venice is the most popular girl in school. She is snobby, sassy, stuck up, and self-centered. Not only is she dating jockie hottie, Jess Nightland, but she is the head cheerleader of the cheerleading squad at Eastwood High. When Rachel comes to Eastwood and tries out for the squad, Skylar can’t help but let her join after she pulls off an amazing audition. Skylar befriends Rachel but truly she is jealous of her. To test her limits, she sends her on a mission to steal Westwood’s 1960 trophy. It’s no surprise to Skylar when Rachel comes back with nothing but what does shock her is Rachel’s confident attitude even after she failed. And soon Skylar notices how Rachel misses practices often and suspects she is up to something.

Skylar does a little snooping and soon discovers Rachel’s singing past and finds out that Rachel is starring in Westwood’s school musical. Excited to take her down, Skylar exposes Rachel’s secret, making her the most hated girl in school. But Rachel still has some tricks up her sleeves. Has Skylar finally met her match?

Jess Nightland is Eastwood High’s most popular jock. He plays almost every sport from soccer to basketball to football. He is also Skylar’s boyfriend. Even though Jess isn’t the smartest of the bunch, he is very sweet towards everyone but when it’s time to play, he plays hard. His relationship with Skylar isn't even that romantic. He's only dating her only because he feels obligated to since they're the most popular kids in school but in reality, Jess doesn't care much for her. 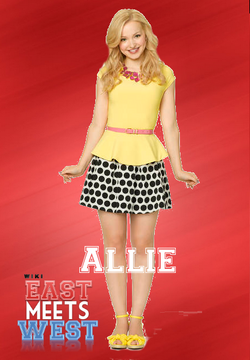 Allieis a very sweet and smart student at Eastwood and the first friend Rachel meets there. She helps her find her way through Eastwood and is also in her AP writing class. Allie is also on the cheerleading team, one of the only nice and smart ones on the team. She is the one who introduces Rachel to cheerleading.

When Rachel is shunned for taking part in the Westwood musical, Allie is the only one who sticks by her side. Allie also thinks the whole school spirit/sports thing at Eastwood is overrated. She doesn't like how people only like the cheerleaders for their popularity and not for what they actually do. She also thinks that there needs to be more focus on the academics. 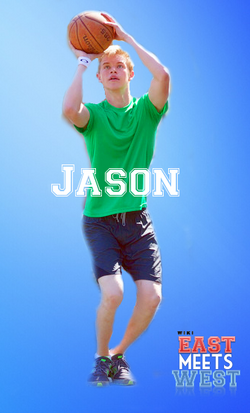 Jason is a student at Westwood and is on the football and basketball team with Ricky. He also is his best friend. He's a bit airheaded and is not exaclty on par with what's going on but always comes through for Ricky at the right time. Jason is actually a very gifted basketball player but is always overshadowed by Ricky's star athletic ability with football.

Retrieved from "https://wikichannel.fandom.com/wiki/East_Meets_West?oldid=90316"
Community content is available under CC-BY-SA unless otherwise noted.