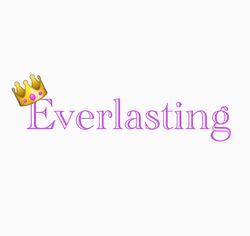 Everlasting is a Wiki Channel Original Movie that is supposed to air in 2015. The movie was picked-up by the network on December 20th, 2014, casting was announced on February 20th, and it was announced familiar Wiki Channel faces Abby Williams and Peyton Borough would be playing the lead roles.

Focused in a Modern Princess era, Lia Denali is a commoner in a semi rich kingdom. All 17 years of her life, Lia and her widowed mother had to work for everything they ever had, sometimes barely managing to get a plate of dinner on the table. Ever since Lia turned 15, her mom stopped being around the house as much as she used too. Lia starts to grow suspicious when her mother starts to turn up late, always looking nice and in the best moods. Lia starts to grow suspicious, and thinks that her mother got a boyfriend. When her mother dumps it on her that she does have a boyfriend, and her boyfriend is the King, Lia all of a sudden gets a crown thrown on her head. But unlike most girls she knows, she hates it. Her new sister, Anna, seems to be a total drama queen, and her brother, James, seems to flirt with every girl in the kingdom, and don't forget he new father the King, who can give her anything she wants in the snap of her fingers. Lia constantly sneaks out of the castle to stay with her best friend Will, and have a sense of being able to live on her own for once. Lia can't wait, for the day she turns 18, she can leave the castle, and leave the city, and she and Will can escape to wherever their hearts desire. But when her James finds out, he makes sure to do everything in his power to suspend her age of freedom. But when Lia starts to discover how much more being a princess is then balls and riches, will she decide to stay in the kingdom?

Retrieved from "https://wikichannel.fandom.com/wiki/Everlasting?oldid=75704"
Community content is available under CC-BY-SA unless otherwise noted.