G.I. Jennings is a brand new half hour Wiki Channel Original family-comedy pilot that will follow a newly re-formed military base family. The pilot was ordered by Wiki Channel on January 24, 2014, created by Jessie1010. Casting currently took place and the pilot was shot in late February 2014 for consideration for a series premiere on Wiki Channel in fall 2014. [1] The series was picked up for a full series in March 2014. The series preview aired on August 10, 2014 as part of Summer So Hot Weekend. The series premiered on September 7, 2014 at 8:30 PM ET, which will be it's regular time.

In “G.I. Jennings,” Casey Jennings is just your average teenage girl who lives with her single mother and her younger brother, Frankie Jennings, in a small town in Boston. But, when her mother and father suddenly announce their remarriage, as an attempt to rekindle their family, the Jennings find themselves moving back to Texas where they will live on th

eir father’s military base again, just like they did when they were infants. Not having lived on the military base in a very long time, Casey and Frankie find it hard to adjust to their new military lifestyle. With the addition of going to a new school, dealing with social life, and getting used to having two parents on the watch for them, this pair of siblings is in for a bumpy ride. Accompanying them is Kendra, their new kid military friend, Uncle Joey, their father's long time best friend and close family friend who they consider family, and Pistachio, their family dog who seems to enjoy the military life better than the suburban.

“G.I. Jennings” is executive produced and written by Jessie1010. About the series, Jessie1010 says, “Wiki Channel strives to bring a variety of shows to our viewers. G.I. Jennings will be a family-teen sitcom that will focus on life on the military base as well as family dynamics. There are a lot of families who live on a military base and it’s never been seen in a series before so we are very excited to be the first to do this.” [1] 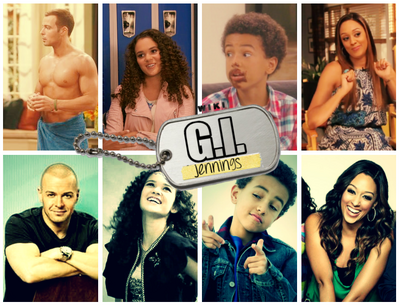 Mikayla Totten as Casey Jennings - Casey is a smart, funny and witty fourteen year old girl. She can be a huge girly girl and when she wants to, a diva. Casey is not too fond of living on the military base at all and prefers to be in Boston where all of her old friends are. But, she knows her parents really want their family to work again, so she tries to pull through it as much as possible and even though her attempts may fail sometimes, she always has good intentions. Once she's on the base, Casey becomes good friends with Kendra Fox, one of the only kids her age on the base. And all in all, even though they can embarrass her sometimes, Casey loves her family and would do anything for them. Railyn Chandler as Frankie Jennings - Frankie is the cutie of the family and is known for his adorable looks. But behind his whole innocent act is a mischievous ten year old boy who loves playing around with others. He is a huge jokester and enjoys spending his time on the base playing jokes on people. And even though he makes Casey mad with his over the top pranks here and there, they always come through for each other and love each other very much. Frankie is also known for always running off, getting into trouble, and being hard to find. Tia Mowry as Shannon Jennings - Shannon is the mother of Casey and Frankie and the new wife for the second time of Greg who is a military soldier. A year prior to the second engagement, Shannon met up with Greg again so he could help her with a project she was working on for work. During this time, Shannon and Greg fell in love all over again and within a few months, the two were announcing their remarriage to their children. Shannon finds it very hard to adjust back to the military life and struggles living with it but for the sake of the family, she tries to get used to it. Shannon also enjoys helping organize events on the base for the kids and families. Shannon has been called a "cool mom" various times by some of Casey's friends but Casey and Frankie don't see it that way at all. However, Shannon is a great person to go to for fashion and girl advice and Casey loves talking with her when she doesn't have a friend to go to. Joey Lawrence as Greg Jennings - Greg is the father of Casey and Frankie and the new husband for the second time of Shannon. Greg is so excited to have the family back together on the base. The last time they lived there together was when Casey was four and Frankie was only a few months old. He tries to make their new life as comfortable and family loving as possible but it may be hard for him when his military mode kicks into gear. Greg is typically a pretty flirtatious and charming guy, especially towards his wife. But when Greg is training, he gets very serious like a military solider should. Greg also has trouble with patience and usually needs the help of his wife to hold his temper, especially when the kids get attitudes. Elfie Turner as Kendra Fox - Kendra is a fourteen year old girl and a new friend of Casey Jennings. She’s lived on the base for years and knows everything about the place from top to bottom. She helps Casey and Frankie navigate their new life in Texas. Kendra is also very excited to have Casey and Frankie on the base since she does not have many friends there. Personality wise, Kendra is pretty calm and very sarcastic. Kendra is more of a tomboy and loves boyish things such as video games. At school, Kendra was always an outcast and didn't have much friends. Only a boy named Leo ever really talked to her but she never really considered him her friend. It's not until Casey shows up that Kendra really begins to open herself to friends and starts making close relationships with other kids. Wilmer Valderrama as Joey Dianzo - Joey is the funny "uncle" of Casey and Frankie. Joey is Greg's best friend and they've been best friends ever since they were kids. They went on to join the military together. Joey is like family to the Jennings family. Casey and Frankie call him Uncle Joey. When Joey finds out the news of the family coming back, he is ecstatic to see his favorite kids again. He plans on helping them have the time of their life on the base, but Greg never approves of his ideas of “fun" for the kids.

James Stewart as Tucker Underwood (known as Tanned Sand Boy) - Tanned Sand Boy is a teenage boy who appears in the pilot. He is noticed by Casey and Kendra who immediately develop a crush on him. Since he is tan and carries sand bags around the base as part of his job, they call him "Tanned Sand Boy." He is only a year older than the two. Tanned Sand Boy will be a recurring character in the series and his name will be revealed later on. In the episode "Sella on the Base," his name is revealed to be Tucker Underwood.

Drew Clarkson as Leo - Leo was always one of the only people in school who actually talked to Kendra. In all honesty, Kendra isn't too fond of him because he's really annoying and she doesn't consider herself his friend just because he's the one of the very few who talks to her. But Leo considers himself Kendra's friend. The two were usually always stuck together until Casey came along. Leo becomes friends with Casey but she is very weirded out by him. Leo is generally really sweet and a little inappropriate at times.

Jessica Willows as Sella - Sella is Casey's best friend from Boston. She is a fashionista and a girly girl like Casey. She becomes Casey's phone friend who she talks to everyday to keep herself sane while on the base. She does not appear in too many episodes and is mostly seen a few times while Casey is on the phone. Sella appears in 3 episodes in season two.

G.I. Jennings was officially picked up for a first season by Wiki Channel that consisted of 21 episodes and officially premiered September 7, 2014.

A second season of G.I. Jennings was picked up in March 2014 and filming began in April. The season will continue to focus on the family's life on the base and viewers will see growth in each character.

Original number of episodes: 14
Season extension amount: 14
Total episodes: 28
Specials: N/A
If the series creator goes inactive NYCgleek will take over.
If the back up users go inactive, the show will be ended where she/I left off..
Filming Dates: TBA
Notes: N/A

Original number of episodes: 25
Season extension amount: N/A
Total episodes: 25
Specials: 1
If the series creator goes inactive NYCgleek will take over.
If the back up users go inactive, the show will be ended where she/I left off..
Filming Dates: N/A
Notes: N/A

Threads: 1
Retrieved from "https://wikichannel.fandom.com/wiki/G.I._Jennings?oldid=90932"
Community content is available under CC-BY-SA unless otherwise noted.