Gilliam "Gill" William Remine (born March 4, 2004) is a young American actor. He has been acting ever since he was 2 years old.

Gilliam was born to Andrew and Chandi Remine. He is the younger brother of Araceli Remine. He started acting right after his sister made her big break in a juice commercial. His parents wanted him to follow in his sister's footsteps. He has a younger sister, Bedford.

He starred in a couple commercials at first then, he guest starred in a few tv shows as a minor or recurring or a supporting character. At the time his sister auditioned for Girl meets Workd as Riley Matthews. After she was casted, he auditioned but for a different role, but was given the role of Auggie because the producers thought a brother & sister on set playing a brother & sister in a Tv would be adorable. Though it was only for a pilot since the show wasn't picked up.

Gilliam likes to spend time with his sisters, though they all tend to disagree they still love each other. He goes through Araceli's Chatter in his free time but blatantly refuses to get his own. 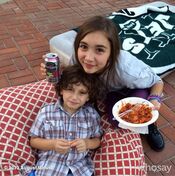 Retrieved from "https://wikichannel.fandom.com/wiki/Gilliam_Remine?oldid=84041"
Community content is available under CC-BY-SA unless otherwise noted.