Jeremy Scott Gents (born February 1, 2001) is a young American actor. He has been acting ever since he was one year old.

Jeremy was born to Sabrina Scott and Jace Gents. He is named after his Grandfather but dropped the Jr. once he entered acting. He is the close friend of Araceli Remine and her brother Gilliam Remine. He has been acting a bit longer than his two friends.

He starred in a couple commercials at first and entered into a few small films. He then landed his first big role as Joey Clib, a recurring role in Clearview. It lasted until 2006, but his character stopped appearing late 2005. He played Noah in Living With a Cheater in 2007. Jeremy had a supporting role in the movie Hula Hoops, who was a teammate of the protagonist of the movie. He guest starred on The End as Joey Campback. He appeared in a few scenes as Luke in Destiny Calls in 2011. In Just a Friend, he played Greg, the main character's nemesis from 2012-2013. He was set to be a supporting character in a DC pilot called Girl Meets Earth, but it unfortunately was not picked up to a series. He will be in the upcoming Wiki Channel series Studio Funny, a sketch comedy where he will portray different comedic characters.

Jeremy spends his time hanging around his two close friends and also Casey Fox, who happens to be friends with all of them. 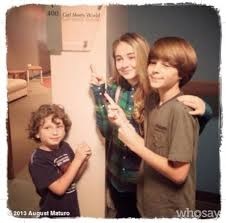 Retrieved from "https://wikichannel.fandom.com/wiki/Jeremy_Gents?oldid=82723"
Community content is available under CC-BY-SA unless otherwise noted.