! The manager of this actor is inactive.

Liberty Ann Parker Dillon (born July 22, 1997), publicly known as Libery Dillon is an American actress. She is known for her role as Jenn Matthews in In Due Time.

Liberty was born on Jume 22, 1997 to Reggie and California Dillon in Honolulu, Hawaii. All growing up, Liberty would love to surf and would do that 24/7. In 2009, her dad signed her up for an audition for a play called Guppies because he wanted to get her off the surfboard. She loved being in that play and discovered she had a huge passion for acting. In 2010, she told her dad she wanted to do acting professionally. Her dad replied with a simple "Okay". They then packed up their bags and moved to Los Angeles.

In 2010, Liberty signed with a manager and started to auditions. She was a very lucky beginner, and actually got the first audition she did. She got the role of MiMi Alacosta, best friend to the lead, in the movie New Career, a movie about an aspiring actress. In that same year, she landed the role as Remi Bidstrup, girlfriend to the main character, in New Beginnings.

In 2011, Liberty signed up for an audition for Sammy Smith in the Adult TV Comedy, I Need a Place to Call Home. She, sadly, did not get that part, but was offered the part of Lulu Greens, the other families sassy, older daughter who had a huge crush on Seth Smith. She accepted the role, but even though it was a recurring role, it definitely got her career going in that. She said about the series: "Its basically the adult Disney show. It centers on a family, always trying to get themselves out of mess, and the annoying next store neighbors, who don't really help with that." The series had a two season run, and ended because of the lead, Bar Butler, quitting.

In 2013, Liberty decided to take a break. "Its all coming at me so fast" Liberty said, "I just need some time to figure this all out" She wasn't heard from much, until Wiki Channel wanted to work with her. She decided to stop her break and get back to acting .

In 2014, Liberty landed the role as Jenn Matthews in the Wiki Channel Original Series, In Due Time. Later that year, she landed the role as Pearl Diamond in The Wiki Channel Original Movie, Whatever You Want. The movie was later announced cancelled as the creator/producer went inactive. She also was cast in The Dark Side pilot, but that was cancelled for unknown reasons.

She plays a guest role of Scar on Ackerman Agent for Guess Star Weekend.

In 2014, it was announced that she would be playing Skylynn Harris in Mitch's Daymon's Fight Cub Academy. She is currently down in Vancouver filming the movie.

She is set to play Lydia Manning in the WCOS Gone Viral. The WCOS has been cancelled. 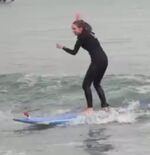 Dillon lives in Los Angeles, California. She still has a huge passion for surfing, and does it all the time. She is an honor roll student at her local high school. In her spare time, she sometimes aches children how to surf at the local boys and girls club. She also says to have made a weird instagram account called InaDaze, which was filled with cute love quotes. She won the national surfing championships of 2013, females under 18 division. She was dating Wiki Channel actor and singer, Lucas Jenkins, however, recent rumors have been spread about a break up. A break up was confirmed in March in a chit that she chitted.

Retrieved from "https://wikichannel.fandom.com/wiki/Liberty_Dillon?oldid=92988"
Community content is available under CC-BY-SA unless otherwise noted.