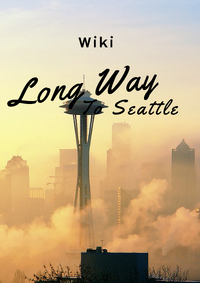 Long Way to Seattle is an upcoming Wiki Channel movie set to air sometime in 2016. The movie was picked up on July 16, 2015, and shortly after, it was announced that the movie would star Jennifer Kyles and Marley Michele.

What if your whole life has been a lie? For Kara Kennedy, it has. For eighteen years, she thought she had everything. Her parents were loving, her family was rich, she had the perfect boyfriend, and she was popular at school. But on her eighteenth birthday, her parents tell her a secret they have been hiding from her for her whole life- They're not her biological parents. Now, Kara and her best friend begin their journey as they search for Kara's biological family.

Jennifer Kyles as Kara Kennedy-Kara Kennedy is one of the school "it girls" along with her best friend, Quinn. Like I said in the plot, she thought she had everything until she found out that her "parents" weren't even her real parents. Kara is a sarcastic kind of girl and tends to make rude remarks about a ton of people, but she can also be nice to people she cares deeply about.

Marley Michele as Quinn Foster-Quinn is Kara's best friend. Like Kara, she is one of the "it girls" of her school. She's typically nice to everyone, but has been known to snap at people when things don't go the way she wants them to. But she is always there for Kara, and the two have been best friends since they were in fourth grade.

Marshall Christian as Ashton Riley-Ashton is Kara's boyfriend and the "heartthrob" of his school. He started dating Kara in their junior year, and they've been together ever since. He's a kind guy who sticks up for Kara, but he's also a bit overprotective. Though He's dating Kara, Quinn doesn't like him that much, despite acting nice around him.

Mark Christian as Ethan Shields-Ethan is a kind guy who meets Quinn and Kara after their car breaks down in the middle of nowhere, and he offers to give them a ride. Ethan is from Trenton, New Jersey with his twin sister, Taylor, and he has a strong bond with her.

Cecelia Kristine as Taylor Shields- Taylor is Ethan's twin sister, and she was with him when he met Kara and Quinn. Unlike Ethan, Taylor's a bit rude to everyone, and she didn't like Quinn and Kara at first, but she grew to like them. She has a strong bond with her brother, and they're both very protective of each other.

Shayna Blake as Naomi Middleton-Naomi is Kara's other best friend, but they aren't near as close as Kara and Quinn. Naomi secretly has a crush on Ashton and part of her doesn't really like Kara, but she still stays her friend.

Jeremy Gents as Connor Kennedy-Connor is Kara's adoptive brother. Like Kara, he's very intelligent. Kara describes him to be the "annoying little brother that you have to love", but their bond is very close.

Retrieved from "https://wikichannel.fandom.com/wiki/Long_Way_to_Seattle?oldid=68703"
Community content is available under CC-BY-SA unless otherwise noted.