Lucy was born on February 28,1999 in New York to Terra and Spencer Jones. By age 7, Lucy decided she wanted to perform as an actress. Her family moved when she was 9 with her mom due to her mother and father's divorce. Lucy and her mom moved to California. Lucy participated in a talent show in Burbank, California, a talent show especially for aspiring performers. She read a monologue. She won because of her amazing acting. Lucy met her manager there and from there, pursued her dream of acting.

Summer first auditioned for a show called "Just Random," a sketch comedy show on a small network. She got on the show as herself and became part of the cast. Around 2010, the show ended and Summer auditioned for other shows and movies. She was 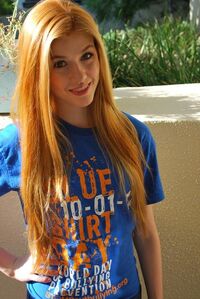 in "The Other Side," playing a smart girl named Erin. "I loved working on the movie! It was fantastic and I can't wait to work on other projects!" she said in an interview. She made a few guest appearances on another show called "Super Girls" in 2011.

In 2012, Summer graduated high school early at only 14 years old. Once she graduated, she went on to act full time. She landed the role of Hannah in the action movie "Sidekick," where she was a supporting character. Later that year she landed the lead role of Jeleanie in the indie R rated comedy film "My Half Dad."

In 2013, Summer landed the lead role of Gertrude Fuller in the upcoming action comedy film, "Hair Red Died." Summer worked on the film for a month and a half in the summer of 2013 but soon, the film was subsequently cancelled after a lawsuit with the production company.

In 2014, Summer landed a guest role as Sabrina in Wiki Channel's upcoming comedy show, Dramatically Average. She soon auditioned for the role of Maelynn Rivers who would be a new series regular in James in Hollywood season 3, a completely revised season of the show. Summer won the role and is set to begin filming very soon.

Lucy is an only child and she is close friends with Laura Bay. She plays basketball in her free time. Lucy is also very smart and enjoys learning.

Retrieved from "https://wikichannel.fandom.com/wiki/Lucy_Summer?oldid=65268"
Community content is available under CC-BY-SA unless otherwise noted.