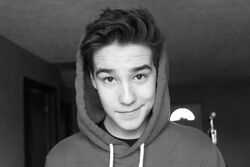 Matt Lanza (born March 17, 1998) is an American singer. He is well known for posting covers on both youtube and vine.

Matt was born on March 17 in Charleston, West Virginia. He was a natural talent from the start, always singing along with his loud family. When he was younger, outside of his family, he was always insecure about his singing talent, and mostly kept it to himself. But one of his friends from school, and encouraged his singing, and from then on he started posting covers on Vine, a popular 6 second video app.

He started by posting his first video, which was a video of him covering Baby by Justin Bieber. He was popular within a couple of weeks, because one of the most popular viners on the site revined him. Over the course of two years, he continued to post covers gaining more fans and followers every day. He eventually signed a deal with Pacific Records, and went on tour with Selena Gomez under them. However, in early 2015, he was dropped from them.

He signed a contract with Wiki Channel and Wiki Records in May 2015, and released his first single with them, Not My Type At All, on June 22, 2015.

His second single, Let's Be Birds, has been announced. The official release date was September 13, 2015. The music video for both of these videos are currently in the making.

Matt lives in Los Angeles with his mom, dad, and younger sister, Jenna. He continues to post small covers on vine, and writes his own music. When he isn't busy, he enjoys things like working out, and video games. He also has a habit of writing small poems.

Retrieved from "https://wikichannel.fandom.com/wiki/Matt_Lanza?oldid=77597"
Community content is available under CC-BY-SA unless otherwise noted.