NOT Another Happily Ever After 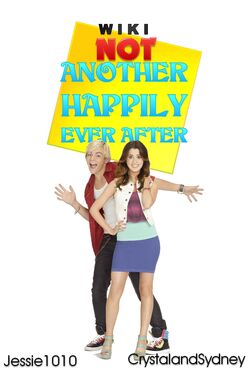 NOT Another Happily Ever is a Wiki Channel Original Movie that premiered on the Wiki Channel February 14th, 2014. It was first revealed to the public on Chatter by Nutter Butter. Later on it was confirmed to premiere during BEE My Valentine Week, on Valentine's Day.

The movie follows the lives of Charlotte Martin and Micah Johnson, two music-loving high school best friends. Charlotte is always on the lookout for her "Happily Ever After" and dates several boys, usually ending in a heartbreak. Every time her heart is shattered, Micah is there to pick up the pieces. But when Charlotte finally finds a guy who she's positive is the one for her, Micah is left behind in the dust. Has Charlotte found who she really belongs with? Or does Adrian have a secret?

Crystal Diane as Charlotte Martin - Charlotte is a 16 year-old highschool girl. She is always on the lookout for her happily ever after, which usually ends in heartbreak for her. She might have a crush on Micah.

Tristan Conti as Micah Johnson - Micah is a 16 year-old highschool boy. He's Charlotte's best friend and is always there to pick up the pieces when she's heartbroken. He has a crush on Charlotte.

Marley Michele as Jessie Ross - Jessie is Charlotte's other best friend. She sets Charlotte up with different guys. She, alongside Michelle and Arthur, finds out that Adrian has a secret.

Jasmine Byran as Michelle Johnson - Michelle is Micah's 17 year-old sister. She is aware of Micah's crush on Charlotte and gives him advice when he needs it. She, alongside Jessie and Arthur, finds out that Adrian has a secret.

Martin Christian as Arthur Martin - Arthur is Charlotte's slightly nerdy 10 year-old little brother. He believes that Micah and Charlotte belong together and tries to convince Charlotte this. He, alongside Jessie and Michelle, finds out that Adrian has a secret.

Katy Young as Diana Bolix - Diana is Charlotte's other best friend. While Jessie helps Charlotte with her love life, Diana helps Charlotte with music. Arthur has never really trusted Diana. She later reveals to Micah that she's planning on keeping Charlotte from performing at the school talent show so that she can perform in her place and get all of the glory.

Mark Christian as Adrian Montgomery - Adrian is Charlotte's first long-term boyfriend. He seems like a nice guy, but Arthur, Jessie, and Michelle find out that that he has a secret- but no one's sure what it is. It's later revealed that he's cheating on Charlotte with Carla- though he apologizes later. He is 17.

Retrieved from "https://wikichannel.fandom.com/wiki/NOT_Another_Happily_Ever_After?oldid=55443"
Community content is available under CC-BY-SA unless otherwise noted.