Start a Wiki
NOT Another Happily Ever After 2 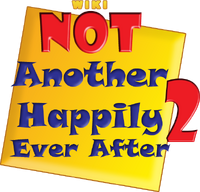 NOT Another Happily Ever After 2 focuses around twins Annie and Bradley Carter. Before leaving for college, Annie wishes to reveal her feelings to her longtime crush Steven, and is overjoyed when she learns that he has dumped his girlfriend to go out with her- until she finds out that he never really dumped his girlfriend. Bradley, on the other hand, learns that his best friend, Lizzie, has had a crush on him since they first met, despite knowing that Elliot, their other best friend, has had a crush on her as well. Now he has to deal with a love triangle as he attempts to figure out his own feelings.

Like its predecessor, NOT Another Happily Ever After 2 features music, although less songs than the first movie.

Sienna Forbes as Annie Carter - Annie is smart, girly, and a little hyper. She has had a crush on Steven, the school jock, since the beginning of high school, and has finally worked up the nerve to ask him out when she learns he has a girlfriend.

Walker Adams as Bradley Carter - Brad is a little dimwitted, but goofy, caring, and lovable. His friendship circle quickly turns into a love triangle when his best friend (and his other best friend's crush) Lizzie admits her feelings for him, and now he must address his own feelings while avoiding ruining his relationship with his closest friends.

Mallory Jays as Lizzie - One of Brad's best friends. Lizzie is the smart one of their group and usually keeps Brad and Elliot from going completely out of control. She's had a crush on Brad since they met, and is aware of Elliot's feelings for her, but doesn't return them.

Carter Spruce as Elliot - One of Brad's best friends. Elliot is a lot like Brad, but a little calmer. He's had a crush on Lizzie for a year and is heartbroken when he learns that Lizzie likes Brad.

Karoline Matthews as Jane - Annie's fashionable best friend. She'd wear a turtle on her head if the internet said it was cool. She prefers shopping to school and isn't as smart as Annie, but is always there to help her when it comes to popularity and dating.

Christian Abrams as Steven - Annie's crush. Steven is good at almost every sport- football, basketball, soccer, even gymnastics, and has caught the eye of almost every girl in school. At the beginning of the movie he's dating Tiny, but appears to have broken up with her when he asks Annie out. But is he as trustworthy as he seems?

Annabelle Marcus as Carol - A cheerleader at Annie and Brad's high school. She's cruel and heartless, and is constantly taunting Annie and Jane. She's intent on winning Steven's heart- after all, everyone expects the perfect girl in high school to end up with the perfect guy.

Bridget Robbins as Tiny - Steven's girlfriend. She's small, shy, and quiet, and no one knows much about her. She's usually left out of the activities around the school as a result.

Retrieved from "https://wikichannel.fandom.com/wiki/NOT_Another_Happily_Ever_After_2?oldid=84193"
Community content is available under CC-BY-SA unless otherwise noted.