Nerd Girls centers around Kelsey and Kristie, two quirky best friends, both extremely smart and a bit on the nerdy side. The two have always been super close and are nearly exactly the same, clicking like magnets. Ever since elementary school however, Kelsey and Kristie were the geeks of the school, always made fun of for their wits. Now entering high school, Kelsey and Kristie are ready for a change after being accepted into Lennford Academy, a high school for the cream of the crop intelligence- much like Kelsey and Kristie themselves. Kelsey and Kristie are very excited to finally go to a school where they will be accepted and where they can fit in. However, Lennford doesn't turn out to be as smooth a sail as they thought it'd be. The two find themselves facing the challenges of the difficult curriculum, competitive students, and being separated from each other- something that completely goes against their lifestyle as Kelsey and Kristie. But even though Lennford is more strenuous and demanding than their old school, the girls know they can take on the challenge if they stick together. Whether they're experimenting in the science lab or tripping in the halls, Kelsey and Kristie are learning something new every step of the way, making the best of this next chapter of their lives together. With big opportunities ahead of them, crazy situations to get into, and their very strange personalities, this quirky pair of best friends is in for a bumpy ride. The series is created by Jessie1010, creator of hit Wiki Channel shows

such as G.I. Jennings and High School Story.

Olivia Staton and Veronica Rodriquez as Kristie Kim and Kelsey McQueen - Kelsey and Kristie are two funny, quirky, witty, energetic, and extremely smart best friends. They consider themselves one and the same and have always clicked like magnets ever since they met in the first grade. For years they have done everything together. When they can't be together or do something together, they use their think a like brains to decide what the other would do. The two share a love for school, learning, thinking, and innovation. For the majority of their life, Kelsey and Kristie have been labeled as nerdy but they however see it as a good thing. Kelsey and Kristie like to embrace it and are proud to be called nerds. Kelsey and Kristie start their new journey at Lennford with excitement and open arms. 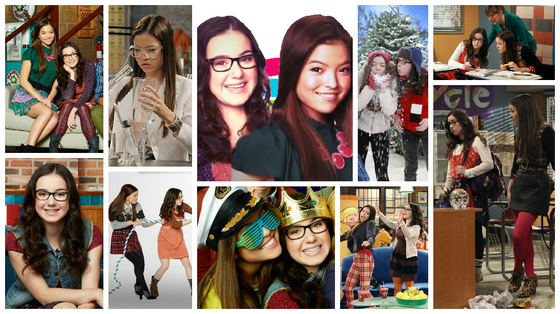 However, in a dog eat dog competitive world, Kelsey and Kristie see that there are challenges ahead that will test their friendship. But, they know that if they stick together, they'll be able to take on anything! While the two click like magnets, they do have some differences. Kelsey is the awkward and clumsy one who can be a bit spontaneous when it comes to organization. Kelsey also tends to stress a lot and thinks a whole lot before she does. Kristie on the other hand is the more carefree one of the two. She is extremely positive, is also a bit of a perfectionist which sometimes backfires, and secretly she loves fashion. These two best friends are complete nerds but they have a lot of confidence as well as wits and when they're together, nothing can stand in their way.

Brienna Holt as Mandy - Mandy is the fashionista of Lennford. She is one of the only girls in the school who actually cares about fashion and looking pretty. Mandy is also super sweet, very smart, and very fashionable. She also cares for her friends, whether it’s helping them out of a situation or fixing a major fashion mishap, Mandy is always there to help them up. She welcomes Kelsey and Kristie to Lennford with open arms. She is also best friends with Blake.

Riley Sun as Blake - Blake is a very good looking boy who attends Lennford with Kristie and Kelsey. But despite his amazing looks, Blake is secretly not very confident in himself. He is internally shy and tries not to show it but tries to put on a confident front. Blake also good friends with Mandy and his parents are good friends with Kristie's parents. When they were young kids, they had a very competitive relationship and they continue their competition when they meet again at Lennford.

Alexis Thomson as Drew - Drew is one of the smartest girls at Lennyford who is very competitive. She is a bit tense and neurotic because she's so worried about people topping her scores but she also is a good manipulator. She has forever disliked Mandy and now she is very skeptical of Kristie and Kelsey to make sure they don’t top her scores. Drew is a year younger than most kids in her class because she skipped a grade in elementary school but she doesn't let her age define her as a student and let's people know that.

Sloane Belicion as Shay Kim - Shay is Kristie’s protective older sister. Shay is very mature and sometimes feels that Kristie acts too childish. But she overall loves her sister and would do anything for her. Shay has been attending Lennford ever since middle school and expected that somewhere along the way, her sister would join her. She tries to give her her space at school but still keeps an eye out for her and Kelsey. Every morning, Shay drives Kelsey and Kristie to school with her.

Axel Day as Nat McQueen - Nat is Kelsey’s little brother. Nat normally doesn’t say much at all. He is extremely quiet but his actions speak much louder and, having a very curious mind, he is always getting into something behind the scenes. He is pretty close to his sister and with her constantly busy with school nowadays, he struggles to find something to do. Nat starts off as a main character in the beginning of season 1, from episode 1 to episode 10, and then is made a recurring character for the remainder of the series.

Zoran Korach as Finns - Finns is Kelsey and Kristie's crazy young adult friend. Finns is good friends with Kelsey and her family and that's how they know him. Finns is super zanny and childish but always gives fantastic advice. They go to him when they need help.

Tamar Singh as Syed "Sunny" - Syed, known as Sunny, is a student at Lennford Prep, casually very smart and popular but doesn't flaunt it. Sunny is very social, a friend to all. He tends to gossip often which annoys a lot of people. Sunny is a friend bouncer- he bounces to different friend groups. One day he'll hang out with Mandy and Blake and then the next day you'll see him making friends with Drew. This causes many people not to exactly trust Sunny because he knows almost everyone in the school and they don't want him telling their business. Sunny is known to be a gossip and spread things around school, since school is so easy for him, it's how he entertains himself. Kelsey and Kristie, while they find him to be a nice guy to be friends with, make sure to steer clear of telling him too much.

Elaina London as Johanna - Johanna is a student at Lennford Prep and is a good friend of Shay. Johanna is a very frantic girl and tends to stress a lot, even over the smallest of things. Shay is a lot calmer than Johanna so the two kind of balance each other out, even though Johanna can get on Shay's nerves with her constant worrying. Johanna is seen in the pilot episode of the series and appears in various episodes after.

Nerd Girls was first pitched to Wiki Channel by Jessie1010 in April of 2014 as The Nerd Girls. Jessie1010 loved the idea of two quirky girls leading a show, as opposed to the usual perfect girl with a perfect life. He also loved the idea of having a show that centered around the academic part of school and its hardships. The channel loved the idea and embraced it with open arms. The title of the show was soon changed to Nerd Girls.

Kelsey and Kristie were the first characters written for the show. Their friends were originally written as Mandy and Alex. Alex's name was soon changed to Blake. A twin for Mandy named Brandi was also considered but did not make it to the pilot. Shay, Kristie's sister, was then added and to add more boys to the cast, Nat, Kelsey's brother, was written in. Lastly, Finns, the cooky next door neighbor of Kelsey and friend to the girls, was added to add variety to girls' lives.[3]

Jessie1010 really wanted the cast to be something special and he knew about Wiki Channel actress Olivia Staton, known for the hit movie Too Little Too Late and What's Up With...?. He wanted her to be apart of the show. Ahead of casting offered her the role of Kristie which she excepted. She also was given the position of an executive producer so she could have creative involvement. The show was finally picked up to a pilot in January 2015.[4] Veronica Rodriquez was cast to play Kelsey amongst a group of other talented actors cast to play the other characters (including Alexis Thomson from James in Hollywood). The pilot was filmed in February and picked up to a series in March for a summer 2015 premiere.

The series began promotion in May 2015. Wiki Channel used the hashtag #NerdGirlsBeLike to promote the show, including it in online memes posted by the channel and promos. The memes would include funny captions to pictures from the show and the promo videos included clips from the show, showing what a "nerd girl" would say. On May 29, Wiki Channel held a special programming events titled "Meet Volivia" which introduced Staton and Rodriquez as the stars of Nerd Girls. The night included special airings of both of the girls' Wiki Channel movies, the two talking about the show and themselves, and special clips from Nerd Girls. The show then premiered on June 15, 2015 to 5.5 million viewers after the premiere of Temple Run.[5]

In the July 2016, after one successful season airing on Wiki Channel, creator Jessie1010 announced that Nerd Girls would be moving to a new channel for the rest of its run, following up with a deal he got with another company. Reruns of the show are set to air for the rest of the summer of 2016 and then the show will be pulled from Wiki Channel's lineup completely.

Original number of episodes: 14
Season extension amount: 10
Total episodes: 24
Specials: 1
If the series creator goes inactive Silly1! will take over.
If the back up users go inactive, the show will be ended where it left off.
Filming Dates: April 13 to May 22 filming first 7 episodes. June 1 to July 10 filming next 7 episodes.
August 3 to September 4 filming 5 episodes, September 14 to October 9 filming 5 episodes.
Notes: N/A

Retrieved from "https://wikichannel.fandom.com/wiki/Nerd_Girls?oldid=90305"
Community content is available under CC-BY-SA unless otherwise noted.