Start a Wiki
Sleight of Hand 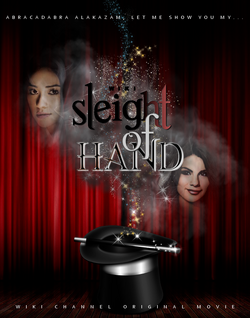 Sleight of Hand is an upcoming family horror Wiki Channel Original Movie as part of Wiki Channel's Halloween 2015 line up. The movie will premiere on October 23, 2015.

Danielle and Trent Hastings are 18 year old and 16 year old brother and sister who live in the small town of Cevaville. Nothing interesting ever happens in Cevaville- that is until one fateful Halloween. The great Sleight of Hand Magic Act is coming to town, a magic act that tours the world and is famously known for their creepy and scary shows, so scary that it’s been banned from towns and some people don’t even dare to go to a show. This month the act is set to perform various shows at the town and Trent and his friends couldn’t be more excited to go. His sister Danielle however is pretty chill about it all and isn’t convinced that the act is going to scare her much. But, the town is in for a surprise when they learn Sleight of Hand’s shows for the season are going to feature a brand new leading lady: Miss Mikayla Mon De. 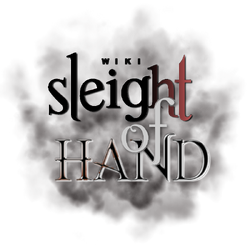 Bouncy black hair, sharp color changing eyes, and a tight leather jumpsuit, Mikayla Mon De catches everyone’s attention with her alluring looks and bold yet mysterious attitude- especially all of the guys’. In all of Mikayla’s magic acts she lures the attention of the young men toward her and takes one of them onto the stage, putting them into a sensual trance, thus allowing her to perform her magic trick. And the trick always turns out to be fantastic. All of the boys are a buzz about the mysteriously beautiful Mikayla, even some girls look up to her. The entire town loves her. But Danielle soon notices that everyone’s obsession with Mikayla is becoming a bit too much. The guys are kissing the ground she walks on, the girls want to be like her, and no one even seems to notice the tiny bad deeds Mikayla does around town- tripping in an old man for example. But after Danielle does some investigating in Mikayla’s tour van, it all clicks in her mind. Mon De. De Mon. Mikayla is really a witch planning a plot against the town and Danielle is the only one who seems to notice her evil ways. But before she can get anyone to believe her, it’s too late and on Halloween night, the last performance of Mikayla, everyone in town who’s ever been tranced by her is now a mindless drone, controlled by Mikayla and abiding to her every order- even Trent. Now Danielle must figure out a way to stop Mikayla, who is using her army of drones to wreak Halloween havoc, and get her brother back before it’s too late.

Retrieved from "https://wikichannel.fandom.com/wiki/Sleight_of_Hand?oldid=79574"
Community content is available under CC-BY-SA unless otherwise noted.