Start a Wiki
This page is an instructional page telling you how to make an actor on the wiki. 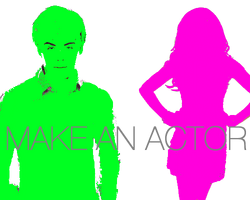 Every actor must have a page. Included on the page should be the template Actor Infobox. The following sections (using header 2) should be included:

The first option is that you can set your actor up for adoption for another user to adopt them as their own. Here a few rules for putting actors up for adoption:

To put your actor up for adoption, you must put this template on their page:

NOW HIRING
This actor is in need of a new manager and they are now hiring! If you want to adopt this actor, please visit the actors board and request to do so.

The template is called "Adoption." You can also notify users on the Actors board that your actor is now up for the taking.

Some users may not want their actors to continue on the channel, they just want to get rid of them. In this case, the actor should simply leave Wiki Channel. In doing this, this template should be put on their page:

LEFT THE CHANNEL
This actor has left the Wiki Channel and Company.

The template is called "Left." This could apply to many actors, for example, actors who are a part of ended shows. For example, after Kitty Couture ends, if Lisha Jane wants to go on to different things outside of Wiki Channel, then her manager would put this template on her page. Here are some rules regarding actors leaving Wiki Channel.

This is the third way to get rid of an actor. All you do is simply get the actor's page deleted. This method is for those who simply don't want their actor around, anymore.

Retrieved from "https://wikichannel.fandom.com/wiki/The_Wiki_Channel_Wiki:Guide/Actors?oldid=88360"
Community content is available under CC-BY-SA unless otherwise noted.