Start a Wiki
Too Little Too Late 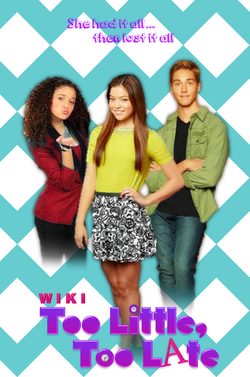 Too Little Too Late is a Wiki Channel Original Movie that is supposed to air in early 2015. The movie was picked-up by the network on March 12, 2014. The movie aired on February 6, 2015, and scored in a total of 5.8 million viewers on its premiere night.

Renee Sage had it all. She was the most popular girl in school, was super fashionable, had the coolest friends, and a super cute date to Junior Prom. But with the sad news that her dad, a famous lawyer, had lost his case and all the money he put into it, she looses it all. Now, she has to live with her withdrawn uncle and help him out at his sardine shop. But after embarrassing photos get leaked of her working there, she loses her date, her friends, and most of all, her popularity. Now Renee is forced to hang out with a boy she used to bully, William, and his friends. She thought she had the worst life, and tries to get her old life back. But when she truly finds out the hearts of her old 'friends', she makes it her mission to make them realize how mean they are before the junior prom.

Retrieved from "https://wikichannel.fandom.com/wiki/Too_Little_Too_Late?oldid=75700"
Community content is available under CC-BY-SA unless otherwise noted.