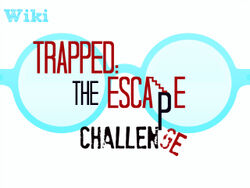 Trapped: The Escape Challenge, also known as Trapped, or The Escape Challenge is a Wiki Channel Original Movie which premiered on January 9, 2015 before the premiere of In Due Time. It is also known to be abbreviated as Trapped:TEC. The movie was officially picked up by Wiki Channel on June 30, 2014. The movie was casted July 9, 2014, and began filming July 15 of 2014 in Cerritos, California.

Six talented teens - Ben, Avalon, Devon, Hailey, Randy, and Rhiley - are called in for a special opportunity to use their gifts to a special use. Run by scientist, Dr. Ludvig, they are split into two teams and are given three days to escape a very difficult maze in a mansion. The one who completes the task most successfully wins the special opportunity. But in reality, Dr. Ludvig is trying to make the six use their talents as much as possible so he can use the results to develop a serum, a serum that will ultimately transform him into the most talented and intelligent human in the world. After trying to escape on their own but failing, some of the teens finally decide to call it quits and request to go home. However, Dr. Ludvig refuses to let them go and at that moment, they realize it is not just a game or competition. The six soon conclude that to get out of the torturous maze, they'll have to work together, each and every one of them, using their talents. With danger, pride, and a bit of romance ahead of them, these six very different teens are in for an adventure. And with strong friendship and great teamwork, they can battle it all. [1]

Retrieved from "https://wikichannel.fandom.com/wiki/Trapped:_The_Escape_Challenge?oldid=75701"
Community content is available under CC-BY-SA unless otherwise noted.