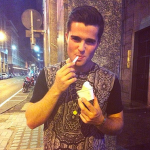 I don't really feel like writing long descriptions of each scene cuz' that's not my thing, but I guess I can give it a shot. :)

The episode starts off with Courtney dreaming. She is seen racing in Trails, but Trails quickly stops completely. Courtney gets mad and tells Trails he's a piece of worthless junk. Then, Courtney slams the door and goes away.

After she's awake, she is thinking about her weird dream. Today is her 16th birthday and since she has a lot of interest in racing her dad decided to give her her own car. David used this car before as a race car, but now he is giving it away to Courtney. He tells Courtney that she must take him for a test ride which she does.

She drives over to the place where her boyfriend, Wyatt, is introduced. He works as a mechanic and he likes to fix cars. While she's there, Wyatt has a present for her. He says happy birthday and for her birthday, he had edited a lot of pictures and videos into a compilation he gave to her. It was full of romantic stuff, things they've done together etc. She found it very special and says thanky. After that, she had to go back home when Wyatt stops her to tell her that he had something for his dad. After they both gets inside and down to his basement, lightning hits Trails where he is given his own mind. They get back up and Courtney drives back home, but on the way home she is finding it hard to communicate with Trails because he is driving everywhere else Courtney wants.

After getting home, Courtney sat down in her room. She picked up a special necklace that her grandmother gave her before she passed away. She opens it and inside is a beautiful picture of Courtney and her grandmother, Whitney. She started to cry after looking at it for a while and that's when Maria bursted into the room to check on Courtney. She sat down beside her and tried to comfort her. This is a very touching scene to the viewers. :P

Retrieved from "https://wikichannel.fandom.com/wiki/User:Austin9393?oldid=91877"
Community content is available under CC-BY-SA unless otherwise noted.