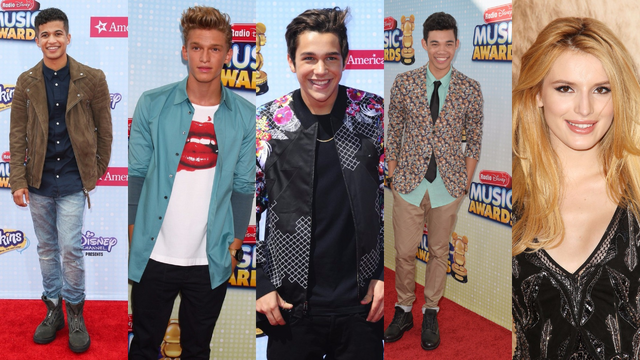 EXCLUSIVE: As Wiki Channel begins to roll out new programming for 2016, the channel seeks to attract more viewers to the stars themselves. This just in, Wiki Channel has announced a musical-comedy short series about the hit Wiki Records boy band 4 Way Street. The rising in popularity boy band consists of Wiki Channel actors Jesse Raynes, Dakota Roberts, Heather Sands and Dane Wilkins. The four boys formed the boy band back in the summer of 2014 and have thus far released charting singles such as "Classic" and "(Baby I'm) Counting On You" with a debut album set to hit music distributors this spring.

The fictional short series, which has a working title of 4 Way Streets & Shorts, follows Heather, Dane, Dakota, and Jesse as they persist as the boy band 4 Way Street and embark on the comedic and crazy adventures that comes with working on music and in the music business, all while trying to maintain the "bro-hood" that they've come to know. Accompanying them on the ride is their curious next door neighbor, Melanie. Storylines throughout the series will be inspired by the lives of the band and the challenges they've faced.

Kitty Couture actress Christine Ryan is set to play girl next door Melanie who has her eye set on political journalism but often times ends up getting involved in whatever 4 Way Street is doing for the day when she gets writer's block, despite her seeming uninterest in the band. Prior to her role on Kitty, Ryan played a supporting character in the Wiki Channel original movie Everlasting along with Heather Sands.

The series is being produced by manager of the band Jessie1010, who also produces Wiki Channel hits such as the new Nerd Girls and G.I. Jennings. "We are so excited to show the channel more of the boys," said Jessie1010. "With their new music coming out, they're on a rise to success and this series will pull in so much more for them. Our fifth street Christine is a talent and everyone will love her. The channel and I have complete faith in them."

The short series is set to premiere on Wiki Channel this year.
Retrieved from "https://wikichannel.fandom.com/wiki/User_blog:Jessie1010/The_Pilot:_Wiki_Channel_Announces_Short_Series_About_Boy_Band_4_Way_Street?oldid=84049"
Community content is available under CC-BY-SA unless otherwise noted.