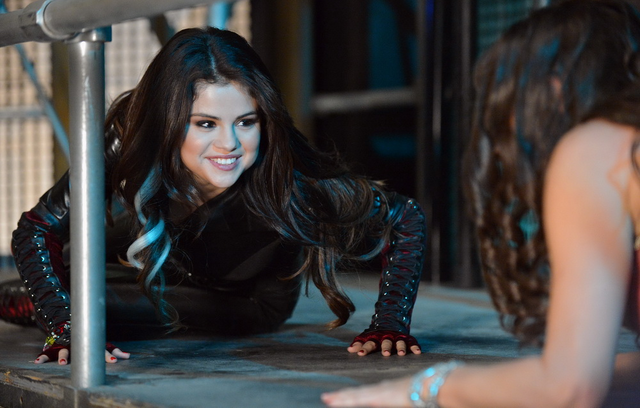 The TV movie follows the story of the small town Cevaville as it is visited by the famous Sleight of Hand Magic Act. The usually dead town is a buzz about the visit and looks forward to a series of fun magic acts. But everything may not be what it seems with the magic act, especially with its mysterious leading lady running the show. 18 year old Danielle Hastings is the only one who sees that. And whether people believe her or not, she's set to do whatever she can to save the ones she loves.

The first look photo shows the leading Sleight of Hand magician, Mikayla Mon De, played by hit Wiki Records artist and Studio Funny actress, Sienna Forbes. We see the mysterious lady laid before another girl in the corner. Silver locks hanging and dawned in black leather, Ms. Forbes looks like she's up to no good.

Starring in the film as Danielle Hastings is Sloane Belicion who currently acts in the hit Wiki Channel series Nerd Girls and was seen earlier this year in the Wiki Channel action movie, Temple Run, as Karma Lee. Playing her brother Trent Hastings will be newcomer Ace Bronson. Actors Issac James, Kimberly Parkson, Jake Daugherty, and Will Evans will play the roles of Rice, Aubrey, Jared, and Peyton respectively.

Last year Wiki Channel released their movie ZAYN as part of their Halloween programming which featured various big stars along with new ones. Sleight of Hand will feature a wider range of new stars to introduce viewers to and will shoot for an older demographic than most Wiki Channel movies.

The movie is set to premiere this October on Wiki Channel as part of their Halloween line up.

Retrieved from "https://wikichannel.fandom.com/wiki/User_blog:Jessie1010/The_Pilot:_Wiki_Channel_Releases_First_Look_of_Halloween_Themed_Movie,_%27Sleight_of_Hand%27?oldid=74486"
Community content is available under CC-BY-SA unless otherwise noted.