Happy Halloween, Weeblers! Today is the scariest day of the year and we hope you guys are all having fun celebrating! With all of the spooky and amazing things that aired this October on Wiki Channel, we can truthfully say that this month was too poppin'! And to round out the month, we're hitting you with the POST show Weebley for the hit new WCOM, Sleight of Hand! Continue on to read our thoughts on the new movie and some fun Halloween tidbits! 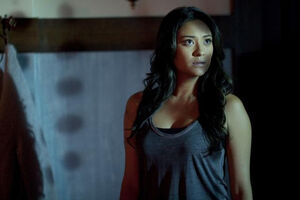 Just last week the brand new Halloween themed movie, Sleight of Hand, aired on Wiki Channel and we couldn't have loved it more! The abracadabra astonishing TV movie rocked the night and had all of the Halloween world buzzing. This movie, starring Sloane Belicion, Sienna Forbes, and newcomer Ace Bronson, was a lot different than other Wiki Channel movies. The movie was very mysterious, saucy, and took a lot of twists and turns. We loved the magic theme of the movie and loved how everything tied into each other. We have to admit, we got a few chills here and there during this movie and that made watching it all the better. Sleight of Hand, which follows Danielle and Trent Hastings as they face the evil Mikayla Mon De of the Sleight of Hand Magic Act when it visits town, took the idea of magic and brought it to a whole new level. And not only did this movie have the horror down, but it also had a lot of heart. The relationship between brother and sister Danielle and Trent was starting to break at the hands of evil magic but this movie showed us that the magic from the heart is forever and always more powerful than anything. Love never fails.

So what did you think of Sleight of Hand? The movie received 5.3 million viewers on its premiere night, a huge success for Wiki Channel! But really, what were you thinking during the movie? We got together with the movie's star Sloane Belicion to make a set of gifs depicting your exact reactions throughout the movie!

When Danielle’s parents don’t want to lend her money even though it’s Halloween weekend and she has to take care of her brother.

When someone gets Mikayla Mon De’s face tattooed on their stomach.

When Danielle’s own brother falls for Mikayla’s tricks and ignores her warnings.

When Mikayla offers Danielle one of her merchandise magic wands but she darn well knows she doesn’t like her.

When Trent tells Danielle that Mikayla would make a better sister than she ever would.

When Mikayla locks Danielle in a box and tries to cut her in half.

When Aubrey wants to go to a magic show over hanging with her best friend on Halloween night.

When Danielle gets her brother back but realizes she still has to deal with this witch.

When Mikayla loses all her power and tries to threaten Danielle but then Trent knocks her out.

When Rice reveals he used to date Mikayla.

When Trent wants to dispose of Mikayla’s body by throwing her into the river and letting her drown.

When the movie ended.

Haha, thanks Sloane! We hope you guys liked Sleight of Hand as much as we did! October 23 was literally the night of the month, not only did we get the premiere of this movie but we also got an awesome new episode of Genie! which had Sienna Forbes making a cameo as Mikayla Mon De and then the awesome premiere of Sapphire Bannister's new music video for "Bad Blood" which also featured Sienna! And she hosted the night, that girl was literally everywhere.

The movie ended with Mikayla still alive, only now trapped away as a mortal. Do you guys think that a sequel could bring along a new story with Ms. Mon De?

Read our pre-show Weebley for Sleight of Hand right here!

PRETTY GIRLS LEARN TO WORK IT EARLY
OMG okay so can we talk about some new music? If you watched to the end of Sleight of Hand you know what we're talking about and if you are a big YouTube watcher, you definitely know what we're talking about! Carly Shu just dropped a new single titled "Pretty Girls" and it's killer! The music video dropped two weeks ago on Carly's YouTube channel and already has 10 million views! The new single released a week after and is currently climbing the charts. The song was featured in the credits of Sleight of Hand and is on the movie's soundtrack. Check out the music video below: