LEFT THE CHANNEL
This actor has left the Wiki Channel and Company.

Val Mitchell is a Scottish actress who is known for her role as Amy Pond in the BBC sci-fi series, Doctor Who. She is set to star in the upcoming Wiki Channel series, NCFA Academy as Olivia Jones "FireGirl".

Val was born on January 10th, 1995 in Inverness, Scotland to Alex and Brittany Mitchell. She was nine when she told her parents she wanted to be an actress. At age 10, she did a cameo on a show. She continued to act and never gave up.

Val landed her first role in 2006 in Karli and Abby. She made great friends and did a cameo in their promo before it was cancelled.

In 2007, she tried out for a lead role in a show coming on Nick but they decided to cancel the premiere. But she didn't stop there: she did a commercial for a local food restaurant in Scotland. She attended the New Year's Party in NYC in 2007 and was interviewed while there.

In 2008, she was in a Build-A-Bear Workshop commercial and was interviewed by People magazine after wrapping up the commercial. "I wouldn't get upset about every little thing. I was going to be in a show, but it was cancelled, but that didn't stop me." she said in the interview.

In 2009, she had made a charity called Dream Catchers, which helps kids in need.

By 2010, she had won an award for Role Model of the Year and thanked everyone who supported her through every step of the way.

Val was casted for the 11th doctor's first companion, Amy Pond in British Sci-Fi show, Doctor Who. She made her first appearance in "The Eleventh Hour" which her cousin had portrayed young Amelia "Amy" Pond. She had appeared in Doctor Who once before in 2008 as a Soothsayer in "The Fires of Pompeii". 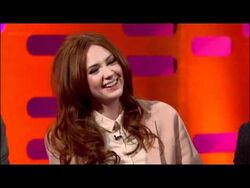 During an interview at the 2011 San Diego Comic-on, Mitchell revealed she would be returning to ​Doctor Who on December 15, 2012. It was announced that she would leave Doctor Who during the seventh season in 2012.

Valerie was offered to be in the Wiki Channel, which she gladly accepted.

Val later received the role of Victoria Santos-Thomas, the older sister of Caliesse "Cleo" Santos-Thomas. She appeared in a couple of episodes. She was also casted as Olivia Jones "FireGirl" in NCFA Academy.

Retrieved from "https://wikichannel.fandom.com/wiki/Val_Mitchell?oldid=88869"
Community content is available under CC-BY-SA unless otherwise noted.