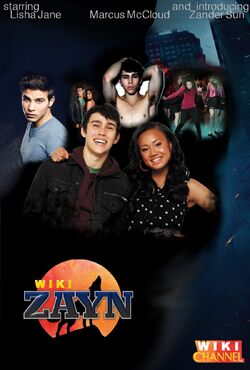 Zayn is an upcoming Wiki Channel Original Movie that will be airing on the Wiki Channel sometime in 2013. The movie was first revealed to the public at the 2013 Wiki Channel Upfront event, by NYCgleek when she announced that she would be a part of the movie. On July 6th 2013 it was announced that the movie would premiere October 25th 2014, around Halloween. On August 5th, 2014, NYCgleek revealed the new official logo along with a new promotional photo with Zander Sun. A single from the movie, "War on the Dance Floor" was officially released October 13th through Wiki Channel Music Group. The movie premiered with 7.1 viewers in the millons.

Zayn follows the story of Zayn Anderson a teenager werewolf from the land of Zortalia in a far away dimension, but when his dimension is under attack his mother and father sends him to live with his human Aunt and Uncle so he can be safe on Earth. Zayn now must adapt to being on Earth and going to high school in Seattle, Washington. However, in this new dimension Zayn cannot access his werewolf powers and abilities must learn to be human like everyone else. But this doesn't help when the monsters that attacked his home creep their way into Zayn's new dimension to find him and end up kidnapping a girl named Lola from his school. Now it is up to Zayn, with the help of his newly found friends on Earth to rescue Lola and save his home dimension from a group of dragon monsters called "Draylocks". The movie has a song played in the film titled "War on the Dance Floor" which is performed by Lisha Jane. The song was officially released a week befoe the movie aired.

Zander Sun as Zayn Anderson(Earth)/Zayn Zor-El(Zortalia) - Zayn is the 16 year old brave, fearless, tell it as it is protagonist of the film. He is brave, confident and a bit of a loner when he first arrives in Earth, not knowing anyone besides his Aunt and Uncle who he has met a couple of times as a child. When Zayn first arrives at his new school one of the kids on the football team teases him before Zayn and him get into a fight. Zayn is sent home for the rest of the day after that. The next day when he returns a lot of the kids are now a bit scared of him seeing as he challenged the school's football star, but he does earn some respect from kids, one is from Lola White, who is one of the most popular girls in school. Zayn befriends her and starts to grow a liking towards her. Zayn may be low key and not share his emotions half of the time, but he does do anything to protect his family and friends. He's not afriad to stand up for himself to others and always gives his honest opinion when asked for it.

Lisha Jane  as Lola White - Lola is one of the most popular girls in school and becomes quick friends with Zayn, which to Carter (Jock at school who likes Lola) isn't good. Lola is nice, sweet and kind to everyone at school and people often to come to her when they have personal problems. After Draylocks come to kidnap Lola and turn her into a permanent werewolf, Zayn must return to Zortalia to save her. She appears to have quick witted and very sharp and just may end up helping Zayn save his dimension.

Marcus McCloud as Hunter - Hunter is a jock at the school and has feelings for Lola. He is a bit of a player and often seems to get girls. Hunter also turns out to be one of Zayn's rivals in the film and gets controlled by the evil forces that want to take over the world.

Carly Shu as Erin - Is a bit of a tomboy and a monster hunter. She and her father try to hunt down and kill Zayn.